The word “totality” has always signaled feelings of “elusiveness” and “let down” ever since I missed seeing that phase of the 1991 total eclipse in Hawaii. As a term used to define solar eclipses, NASA defines “totality” as “the maximum phase of a total eclipse during which the Moon’s disk completely covers the Sun. Totality is the period between second and third contact during a total solar eclipse. It can last from a fraction of a second to a maximum of 7 minutes 32 seconds.”

The world was treated to a total solar eclipse in northern Europe on March 20, 2015. The eclipse was broadcast online from two locations – Faroe Islands and Northern Norway. The video feed from Faroe was washed out with clouds, though the people there did experience totality as the moon’s shadow passed over the area. Viewers in Northern Norway had clear weather and this was shown in the video feed off of which I got the screenshots shown above. Video was webcast from Slooh.com.

A total eclipse last happened in Hawaii on Thursday, July 11, 1991. The path of totality brought the Earth’s shadow over the entire Big Island of Hawaii. I was there at “Ground Zero” on the west side of the island in Waikoloa. Thousands of people flocked to the Big Island and many were in Waikoloa. Totality was to be as long as 6 minutes in that location. Hundreds of us were there watching the moon slowly take a bite out of the sun that morning. However at the very last minute, just before totality, a large, black cloud worked its way into the front of the sun and totally blocked out “totality”. After spending a lot of money on this, I missed totality.

There won’t be another total eclipse in Hawaii until sometime in the early 22nd century.

The next accessible total solar eclipse in the United States will occur on Monday, August 21, 2017. The path of totality will cover a narrow area over the United States from Oregon to South Carolina. The place of greatest totality will be Shawnee National Forest near Carbondale, Illinois. Totality in that location will last 2 minutes and 44 seconds. The rest of the U.S. will experience a partial solar eclipse which also includes Hawaii.

The question for me is do I want to spend a lot of money to go to the U.S. mainland to see this total eclipse.

Solar eclipses notwithstanding, Hawaii and the rest of the world frequently get to see total lunar eclipses. While the phenomenon itself is still rare, it is far more common than a total solar eclipse. I have seen and photographed several lunar eclipses. The earth’s shadow blots out the sunlight from the moon casting our satellite in an eerie, reddish light.

In recent years I have been successful to get a few good shots of recent lunar eclipses. Below is a sequence of shots taken on October 8, 2014 of a total lunar eclipse that was visible in Honolulu and all of Hawaii. (Photos by Melvin Ah Ching Productions, Copyright 2014) 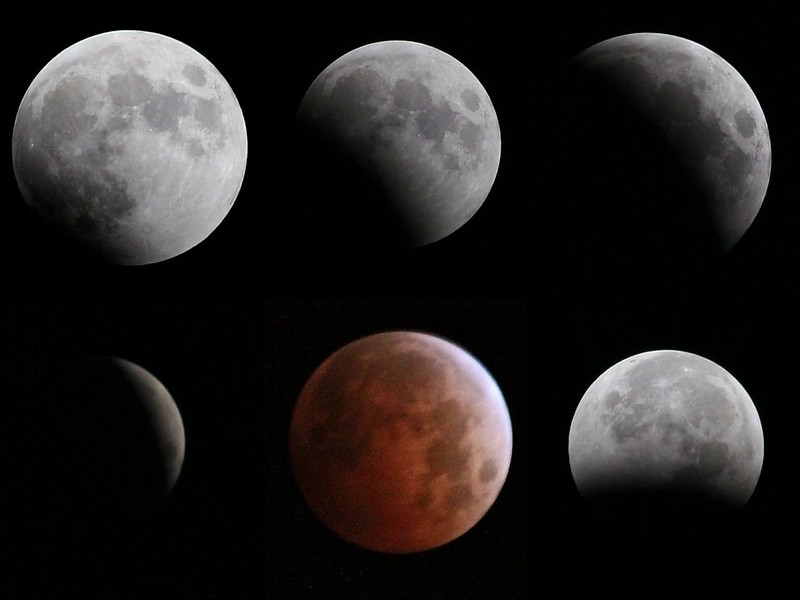